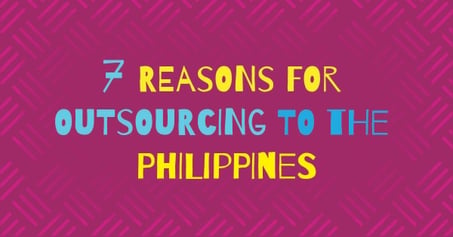 7 reasons for outsourcing to the Philippines

Written by: Keempee Tolentino
Managing a self-owned business can be a tough and grueling job for entrepreneurs because they have to balance controlling their costs without compromising quality. Business owners implement strategies that target this balance.

For some, they contract workforce talent across the globe targeting labour markets which offer highly skilled, well-educated workers at a lower cost.This is called outsourcing. Similar to this is called offshoring, which refers to the expansion of a business operation into a lower cost economy to leverage cost efficiencies. Based on the 2010 IBM Global Locations Trend Report, the Philippines has taken the lead as the top choice for Business Process Outsourcing (BPO) all over the world, unseating India which has been topping the list for years. Among the countries that offer outsourcing solutions to entrepreneurs, the Philippines has always been ranked as one of the best outsourcing countries in the world. Listed below are the reasons why:

1. Time Difference Is Not An Issue. One reason why the BPO industry boomed to success in the Philippines is because Filipinos are flexible on time. Filipino employees are willing to work shifts even if it means working at night, on holidays, and challenging schedules to accommodate clients regardless of where they are located in the world.

2. English Language Proficiency. The Business English Index (BEI), a whitepaper released by Global English in 2013 ranks Philippines as the top BEI for two consecutive years with a score of 7.95, next to Norway with 7.06, and Netherlands with 7.03. The BEI study is designed to quantify global workers’ English competency in the workplace. A BEI score of 1.0 indicates the ability of people to communicate and read only through simple English statements, while a score of 10.0 indicates equivalency with native English speakers. Given these rates, there’s no doubt  the Philippines is by far the top outsourcing location in the world.

3. Highly Skilled Talent. While it is a popular misconception that BPO in the Philippines is limited to call centres, there are a large number of providers offering talent across a multitude of fields including medical transcription, human resources, customer service, financial services, legal transcription, software development, animation, graphic design, content writing and marketing. Contrary to the  belief that the primary reason business owners outsource is only to reduce costs, they also choose to outsource to target the best talent for the job.

4. Excellent Work Ethics. Business owners invest in Filipino teams due to their excellent work ethic, values, integrity, loyalty, service-oriented mindset, and the friendly working atmosphere they they seem to foster in any organisation’s culture. They value integrity just as much as they value time and show innate respect for individuals. Filipinos generally know what fun is without forgetting what responsibility entails and they place a high regard  on professionalism.

5. Quality Yet Cost-Effective. Filipinos strive to produce quality work. This is obvious by looking at the outstanding business results produced by BPOs in the Philippines. In fact, performance efficiency led the BPO industry to grow in the country with a reported figure of 400,000 employees in 2011 and hitting the 1 million mark (or 1% of the population) in 2014. Simply because Filipino talent is a low-cost alternative for businesses, does not mean quality is jeopardised. The difference in labour costs, benefits, and operational effectiveness between countries makes the Philippines a more appealing location to outsource and grow an offshore team. The good thing about outsourcing in the Philippines is that business owners pay LESS for MORE.

6. Strong Government Support. As one of the economic pillars and main revenue generators of the country, the Philippine Government recognizes the potential growth of the industry by providing strong support and infrastructure for BPOs. Some of the government and industry initiatives include:

7. Cultural Compatibility. Tracing back, the Philippines was colonised by foreign forces from Spain, United States, Japan, Portugal, and other countries. As a nation that was colonised by various foreign invaders in the past, Filipinos were influenced with ethical values, traditions, customs, behaviours, and ways of life that weren’t originally theirs. This history is what comprises the Filipino character at present. It also created a compatibility among Filipinos and foreign cultures giving them the edge against other nationalities in providing excellent BPO services.

So, now you know why the Philippines is one of the top outsourcing destinations in the world - what's next? If you are considering hiring offshore staff but not sure what to expect, check out this blog. 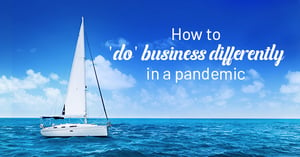 How to ‘do’ business differently in a pandemic

The top cultural differences between Australians and Filipinos in the workplace